Innocence and the Death Penalty: The Increasing Danger of Executing the Innocent

This report tells the sto┬Łries of peo┬Łple like Rolando Cruz, released after 10 years on IllinoisŌĆÖs death row, despite the fact that anoth┬Łer man had con┬Łfessed to the crime short┬Łly after his con┬Łvic┬Łtion; and Ricardo Aldape Guerra, who returned to Mexico after 15 years on TexasŌĆÖs death row because of a pros┬Łe┬Łcu┬Łtion that a fed┬Łer┬Łal judge called outrageousŌĆ” 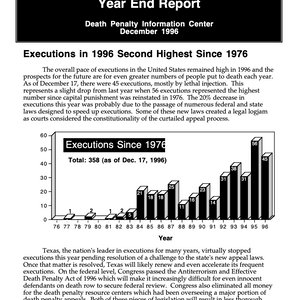 Killing for Votes: The Dangers of Politicizing the Death Penalty Process