New Jersey’s action fol­lows the removal of the last per­son from New York’s death row in 2007, the final step in remov­ing New York from the list of death penal­ty states, which now num­bers 36. New York’s high court over­turned the death penal­ty in 2004, and after pub­lic hear­ings, the leg­is­la­ture reject­ed attempts to restore the punishment. 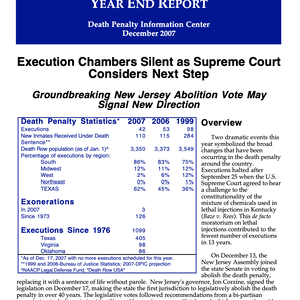 A Crisis of Confidence: Americans’ Doubts About the Death Penalty

Most Americans believe that inno­cent peo­ple have already been exe­cut­ed, that the death penal­ty is not a deter­rent to crime, and that a mora­to­ri­um should be placed on all exe­cu­tions. Even among those who sup­port the death penal­ty and believe they would be qual­i­fied to serve on a cap­i­tal jury, the risk of con­vict­ing or exe­cut­ing the inno­cent would… The num­ber of death sen­tences and the size of death row are also decreasing. 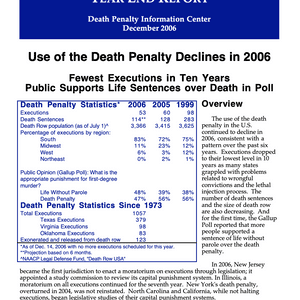 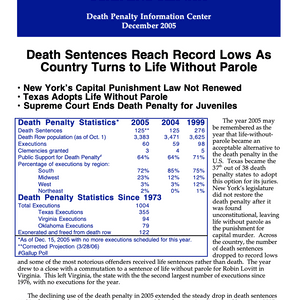 Blind Justice: Juries Deciding Life and Death With Only Half the Truth

Blind Justice, the most recent report to be released by the Death Penalty Information Center (DPIC), is the first to focus on the prob­lems of the death penal­ty from the per­spec­tive of jurors. While jurors have always occu­pied an esteemed posi­tion in the broad­er crim­i­nal jus­tice sys­tem in the United States, in cap­i­tal cas­es the respon­si­bil­i­ty of…