The 2% Death Penalty: How a Minority of Counties Produce Most Death Cases at Enormous Costs to All (Washington, D.C.) Only nine states car­ried out exe­cu­tions this year, equal­ing the fewest num­ber of states to do so in 20 years, accord­ing to a new report released today by the Death Penalty Information Center (DPIC). More than half of the states (29) either have no death penal­ty or have not car­ried out an exe­cu­tion in five years. Many death… 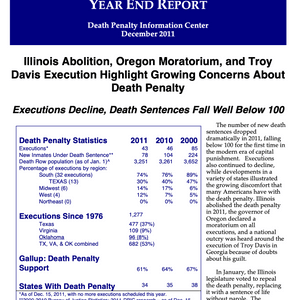 Struck by Lightning: The Continuing Arbitrariness of the Death Penalty Thirty-Five Years After Its Reinstatement in 1976 2010 Election Results Confirm Poll Finding Majority Favor Alternative Punishments and Will Support Politicians Who Vote for Repeal of the Death Penalty. (Washington, D.C.) The coun­try expe­ri­enced a 12 per­cent decrease in exe­cu­tions in 2010 com­pared to 2009 and a more than 50 per­cent drop com­pared to 1999, accord­ing to a report released today by… 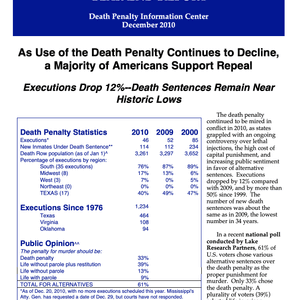