Whether exam­in­ing death sen­tences, exe­cu­tions, the size of death row or pub­lic sup­port, cap­i­tal pun­ish­ment num­bers have dropped in a way not seen in over 30 years. In Texas, Houston‘s Police Chief, Harold Hurtt, called for a mora­to­ri­um on exe­cu­tions on cas­es from his coun­ty, where the police crime lab has been declared unre­li­able: ​“I think it… 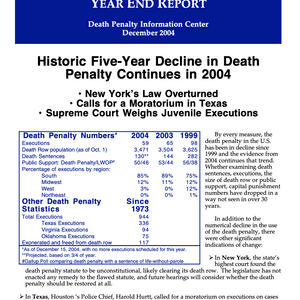 Innocence and the Crisis in the American Death Penalty

This report cat­a­logs the emer­gence of inno­cence as the most impor­tant issue in the long-sim­mer­ing death penal­ty debate. The steady evo­lu­tion of this issue since the death penal­ty was rein­stat­ed in 1976 has been accel­er­at­ed in recent years by the devel­op­ment of DNA tech­nol­o­gy, the new gold stan­dard of foren­sic inves­ti­ga­tion. This evi­dence has… 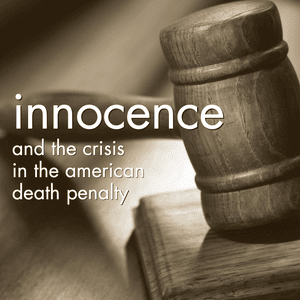 The death penal­ty con­tin­ued its recent attri­tion in 2003, with exe­cu­tions, death sen­tences, and the death row pop­u­la­tion all low­er than a few years ago. EXECUTIONS: The num­ber of exe­cu­tions dropped by 8% from 71 last year to 65 this year. Executions are down 34% when com­pared to 98 exe­cu­tions in 1999.DEATH ROW: The size of death row is smaller… 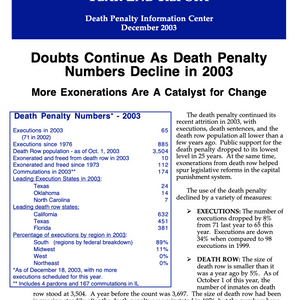 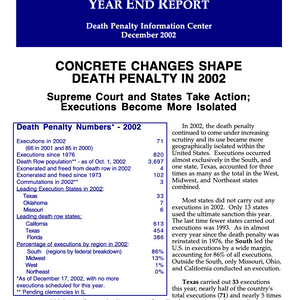 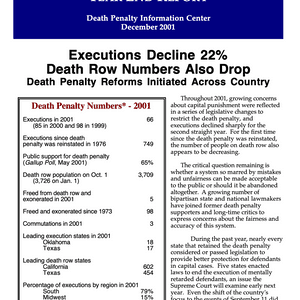