FOR IMMEDIATE RELEASEDeath Penalty Use in 2015 Declines SharplyFewest Executions, Fewest Death Sentences, and Fewest States Employing the Death Penalty in Decades(Washington, D.C.) The use of the death penal­ty in the U.S. The 28 exe­cu­tions this year marked the low­est num­ber since 1991, accord­ing to a report released today by the Death Penalty… PTSD has affect­ed an enor­mous num­ber of vet­er­ans return­ing from com­bat zones. Over 800,000 Vietnam vet­er­ans suf­fered from PTSD. Perhaps even more sur­pris­ing, when many of these vet­er­ans faced death penal­ty tri­als, their ser­vice and relat­ed ill­ness­es were bare­ly touched on as their lives were being weighed by judges and juries. Despite being given… Death Sentences Remain Near Record Lows, Number of States Repealing Capital Punishment Grows,and Public Support for Death Penalty at 40-Year Low. (Washington, D.C.) With 39 exe­cu­tions in 2013, this year marks only the sec­ond time in near­ly two decades that the United States exe­cut­ed less than 40 peo­ple, accord­ing to a report released today by the… 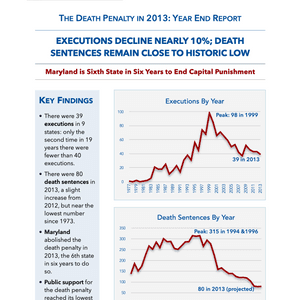