Capital pun­ish­ment con­tin­ued to with­er across the United States in 2019, dis­ap­pear­ing com­plete­ly in some regions and sig­nif­i­cant­ly erod­ing in oth­ers. New Hampshire became the 21st state to abol­ish the death penal­ty and California became the fourth state with a mora­to­ri­um on exe­cu­tions. With those actions, half of all U.S. states have abol­ished the… In 2018, Texas exe­cut­ed more pris­on­ers than the rest of the United States com­bined and, if most of the sched­uled exe­cu­tions go through, could do so again in 2019. 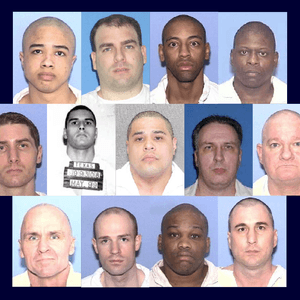 (Washington, D.C.) With 25 exe­cu­tions and 42 death sen­tences expect­ed this year, the use of the death penal­ty remained near his­toric lows in 2018, accord­ing to a report released today by the Death Penalty Information Center (DPIC). 2018 marked the fourth con­sec­u­tive year with few­er than 30 exe­cu­tions and 50 death sen­tences, reflect­ing a long-term… 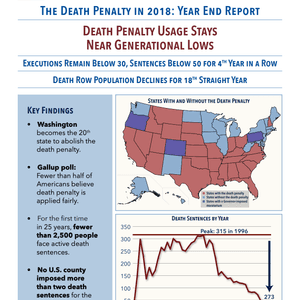 Behind the Curtain: Secrecy and the Death Penalty in the United States

During the past sev­en years, states have begun con­duct­ing exe­cu­tions with drugs and drug com­bi­na­tions that have nev­er been tried before. They have done so behind an expand­ing veil of secre­cy laws that shield the exe­cu­tion process from pub­lic scruti­ny. As phar­ma­ceu­ti­cal com­pa­nies have tak­en action to pre­vent states from using their medicines…