DPIC Analysis: What is the Most Number of Executions Carried Out in a Single Day?

Public Support for Death Penalty Drops to 45-Year Low as Four More Death-Row Prisoners Exonerated in 2017. (Washington, D.C.) Executions and death sen­tences remained near his­tor­i­cal­ly low lev­els in 2017, as pub­lic sup­port for the death penal­ty fell to its low­est lev­el in 45 years, accord­ing to a report released today by the Death Penalty… 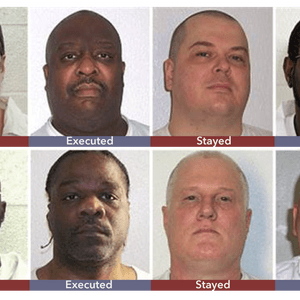 DPIC Analysis: What is the Most Executions Conducted in the U.S. in the Shortest Time Span?

On February 27, 2017, Arkansas Governor Asa Hutchinson signed orders for an unprece­dent­ed eight exe­cu­tions to be car­ried out over a peri­od of eleven days in April. We looked into this and found that, since states resumed exe­cu­tions in the 1970s, no state has ever exe­cut­ed eight pris­on­ers in eleven days. Only four states have car­ried out multiple…